Co-occurrence of anatoxin-a and microcystins in Lake Garda

Cyanotoxins are a global concern in freshwaters and eutrophication and climate changes can have synergistic effects in exacerbating the problem. Deep Subalpine Lakes (DSL) are a group of lakes of huge economic and naturalistic importance in Italy. Together with eutrophication (occurred during 1960s and 1970s) and re-oligotrophication (from 1990 onward) these lake have been experiencing warming and increase of the water column stability. These changes have influenced the phytoplankton (comprised the cyanobacteria) community of the lakes. Four DSL lakes (Lakes Garda, Iseo, Como and Lugano) have been studied with the aim of comparing their toxic potential. For one of them (Lake Garda) an 8 years survey was conducted, allowing a long term trend analysis. Toxin analysis was conducted on a monthly basis by targeted LC-MS/MS. A screening for anatoxins, cylindrospermopsins, saxitoxins, microcystins (MCs) and nodularins was carried out. Among all the listed toxins, only one anatoxin and five MCs were detected in the lakes. In particular, the alkaloid Anatoxin-a (ATX) was found dominant Lakes Garda, Iseo and Como and absent in lake Lugano; the MC-[D-Asp3]RR was found as the most abundant MC in all four lakes. Four other minoritary MCs were also found. The two major toxins are produced by two different cyanobacteria (Tychonema bourrellyi and Planktothrix rubescens) which have however similar ecological traits. Peaks of these toxins occur in warmer months (typically between May and September) in the thermocline layer (around 20 m, in the considered lakes). In summer 2016, the highest concentrations of ATX and total microcystins (MCs) were registered in Lake Iseo (1100 and 430ngL-1, respectively), while in the other lakes values were approximately twice lower. In the lakes where it is present, ATX peak levels are much higher than MCs, thus highlighting the necessity of considering ATX in the procedures of risk assessment. The importance of ATX is expected to further grow in the future with respect to MCs, as demonstrated by the long term trend analysis carried out in Lake Garda that showed a clear decline for MCs from 2009 till 2016 and a relative constancy for ATX. 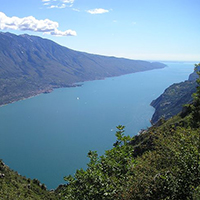 This work is licensed under a Creative Commons Attribution-NonCommercial 4.0 International License.

FOR AUTHORS
FOR REVIEWERS
INDEXING
SCImago

Most read last month
Keywords
Advances in Oceanography and Limnology

is an Open Access, peer-reviewed journal published by PAGEPress®, Pavia, Italy. All credits and honors to PKP for their OJS.